St Paul’s speakers put on a fantastic evening with two great speeches and a tour de force workshop on the use of rhetorical devices.

The meeting began with our Club President – Rakesh taking to the stage to kick off the meeting and tell us about his love for metaphors and Katy Perry.

The toastmaster for the evening was Chris, who managed the evening with the confidence and aplomb of a seasoned member. 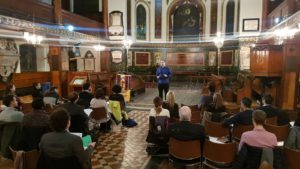 The first of the functionaries was the timekeeper, Nicolas, who gave a succinct explanation of his role and seemed eager to use the red card (as he would later in the evening!).

The first speaker was Christelle, who asked whether people are born to run a marathon. She told us about the challenges of running 26.2 miles, and about the evolutionary advantages of being able to run long distances. She invited us to think of running as a meditative activity. She must have run before the meeting because she delivered her speech with total calm and composure. 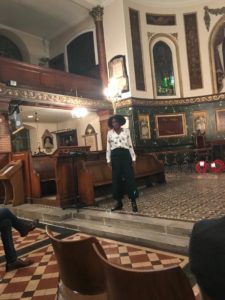 The second speaker was Sarah, who talked to us about the power of music. She told us that music is found in every country, in every culture, in every age of human civilization. She explained how music has the power to move us all, from a fetus to an Alzheimer’s patient. The audience was gripped, but the content was too interesting to do it justice in seven minutes, and it wasn’t long before our timekeeper Nicolas reached for the red card! 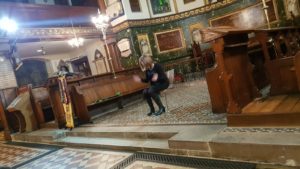 Next up were the speech evaluators Alessandro and Michelle who gave the speakers excellent feedback on their stage presence and use of language. Kudos to Alessandro for stepping up to the role at the last minute.

Acting as Sergeant at Arms, Torrey took to the stage to introduce our guests with efficiency and composure.

After the break, Paul Carroll gave a fascinating workshop on rhetorical devices. He highlighted some of the metaphors and similies used by the Christelle and Sarah in their speeches. He explained that we often use rhetoric without being aware of it. He took us back to ancient times, when people felt warm and safe in the sunlight, but cold and afraid in the dark, leading to the ubiquitous use of “up” or “high” as metaphors for a positive state of mind, and “down” or “low” as their opposite. He encouraged ample audience participation, which made the workshop interesting and engaging.

And there was time during the workshop for a couple of table topics too. Agata gave us a metaphor for Brexit, reflecting the mood that something (anything!) should happen soon to resolve the impasse. Nathan reminded us that the British enjoy pain (as per Brexit), so safety equipment should not be introduced to sports such as Rugby. Well done to Nathan for his third table topic in four meetings! 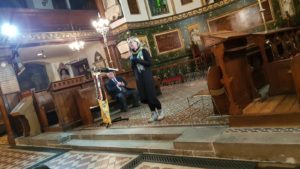 After the workshop, Chris took back to the stage for a bit of club business – a club special election. A few members had already volunteered for positions in the St Paul’s Speakers Club Leadership Committee, and Chris asked if anyone in the audience wanted to put themselves forward. Alas, nobody did, so the candidates ran unopposed and we didn’t get to see their impassioned campaign speeches. Next time!

The new committee members are:

Congratulations to all the speakers, to the new committee members, and a special thanks to Paul for the wonderful workshop on rhetorical devices. Another excellent evening at St Paul’s Speakers.